Yesterday morning was a very special day for little Miguel. His family had taken pains with his appearance on this day, and he looked resplendent. Bundled warmly against the cold morning air, he was taken to a chapel in their native La Paz, Bolivia, and seated with pride directly in front of the altar. This could be the beginning of a story about a child’s Baptism or first Communion. But despite Miguel’s diminutive size, he is not a child. Nor in fact is he a living person.

Miguel is a human skull. Not just any skull, however. He is what is known as a ñatita, a local Bolivian slang that means a “pug-nosed one,” roughly referring to the flattened appearance of human crania, but one which exercises certain beneficial powers. How and when death came to the person from whence this skull came is unknown—it gives the appearance of having been that of a teenager, and was acquired nine months ago from a friend at a dental school. At the school, it was simply a specimen, but given over to a family, one which subscribes to local beliefs about the powers inherent in skulls, it became kin . . . it became Miguel. And it became a ñatita. Cared for and treated as an esteemed member of the household Miguel used his abilities to protect his newfound family and bring them good fortune. And yesterday he was taken to his first Fiesta de las  Ñatitas. There he would be celebrated among thousands of his kind—thousands of skulls that have taken up residence with local families and established similar bonds. The Fiesta is a chance for those who care for these skulls to thank them publicly for their services. Some of their accomplishments are impressive, others seem mundane, but in a decade of coming here to document the festival and interview its participants, I have come to know many of them well. Marcos, for instance, arriving in a humble cardboard box, is credited with having prevented burglars from entering the home of his owner, an elderly woman. Meanwhile, Andres, in a carved wooden shrine, is said to have aided his owner with his studies in medical school and helped him on his way to becoming a prominent physician. Esmeralda, crowned with a floral wreath and seated on a green velvet cushion, advised her owner so astutely on business matters that he now runs one of the country’s most profitable import/export companies. These and so many more were present in the chapel at La Paz’s sprawling Cemetery General, which every November 8 holds the most elaborate Fiesta de las Ñatitas. Estimated to be the largest ever, yesterday’s celebration saw over ten thousand people come through the gates. They came to celebrate an incredible bond, one that is simply unimaginable in modern Western society, where the dead have become ghettoized and stigmatized as an abject group. The bond is not between the living and the dead, however, because to those assembled at the Fiesta the “dead” are in fact still a vital and sentient group. The bond is simply one between friends, who on one side happen to be living, and on the other side happen to be dead. But that difference is seen as flimsy and inconsequential, because for those who subscribe to the powers of the ñatitas, the divide is easily crossed. For those who do not, however, it is wholly perplexing phenomenon. 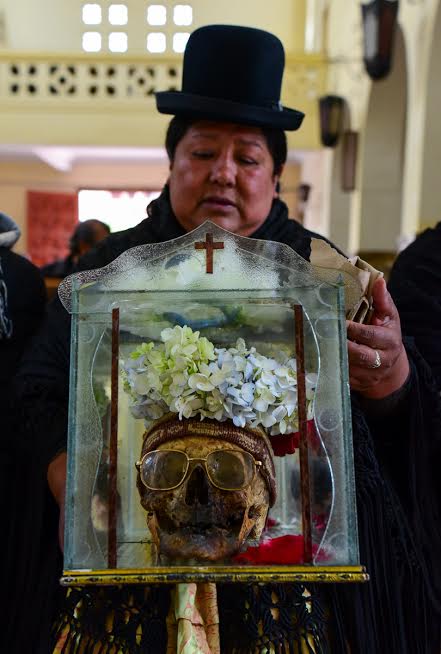 The ñatitas: whose skull is it, anyway?

It’s possible to find people at the Fiesta de las Ñatitas carrying skulls of loved ones—one woman with whom I am acquainted brings the mummified head of her husband each year, and others bring fathers, mothers, aunts, uncles, or even children who died prematurely. Outsiders tend to assume that there must be some preexistent relationship between the skull and the people who care for it, but in fact this is seldom the case. Take, for example, Miguel in our introduction—there is no known provenance to the skull, and the family which now treats him as one of their own has no idea who he (or perhaps even she) may have once been.

The skull which becomes a ñatita is, in the vast majority of cases, that of a total stranger. Anonymous crania may be acquired from various sources, including medical schools and archeological sites, but most commonly they are acquired from grave diggers. At La Paz’s General Cemetery, for instance, gravesites are not purchased outright, but rather leased, and when some future generation eventually lapses in payment the bones of the deceased will be removed. Those who have been exhumed are supposed to be incinerated, and their ashes dumped in a common grave, but their skulls are often brokered by those who work at the cemetery. If this anonymity seems vexing, it must be understood that the ñatitas are steeped in the idiosyncratic ways that human spiritual nature was conceived of by the Aymara, the indigenous people of the local highlands. They traditionally believed that a person’s spirit is comprised of multiple manifestations of ajayu, a word is typically translated as soul—it’s an awkward translation, however, since the ajayu is more subtle and nuanced than the Christian conception of the soul. There are greater and lesser aspects of ajayu which together form one’s character attributes, but after death may separate into unique entities. Thus, the spirit that manifests itself as a ñatita may not necessarily be of the same identity as the person whose skull is in question. This, of course, makes it easier to bond with the skulls of strangers, but I have also encountered cases where crania of known provenance were housing spirits of alternate identities. In one instance, a woman explained that the skull she carried to the Fiesta was that of her uncle Fernando, but that the spirit which communicated with her was a girl named Ana Maria. In another, a masculine spirit named Fidel was manifesting itself through a skull known to have been that of a young girl. It’s not as schizophrenic as it may sound, if one acknowledges that each of us, in the makeup of our character, is really an amalgamation of several different and even conflicting aspects: different measures of impetuous, wise, youthful, mature, strong, weak, and so on, all of which coalesce to form our personality. As for the particular spirit which will communicate as a ñatita, once a bond is established it will reveal an identity, often during a dream, and open a dialogue with its living benefactor. This person will then perform rituals and makes offerings in its honor, and over time the two parties will become intimately connected, establishing a relationship similar to that between close family members. The skull will be kept in a shrine within the home, surrounded by cigarettes, bags of coca leaves, flower petals, and other small gifts which have been left for it. It may also be given characteristic decorations, with cotton balls in the eye sockets (to replace its missing eyeballs), and tin foil around its jaws (as simulacra for lips) being most common. A single ñatita will be enough to provide luck, tranquility, and protection for a household, but in some cases several skulls, each with a different set of powers, may be present. It is common, for instance, to find multiple ñatitas in the homes of local yatiri, an Aymara term for a healer or spiritualist. Their residences are treated as neighborhood sanctuaries, and locals who lack their own ñatita will often select one among the skulls there as their patron, and visit frequently to offer prayers.

Some of these collections are extensive. The largest has grown to 54 and turned the living room of its owner into a small scale charnel house. Perhaps the most famous, however, is a set of 18 ñatitas belonging to a yatiri named Doña Ana; these skulls have developed a sizeable cult following and are considered by many to have miraculous powers. Each skull has its own area of expertise, including health, love, finance, school work, and domestic matters. Housed in a special room lit by candle light, Doña Ana’s ñatitas are often surrounded by a throng of worshippers. Lest there be any doubt about the effectiveness of her skulls, Doña Ana keeps a pile of written testimonials affirming their prowess. 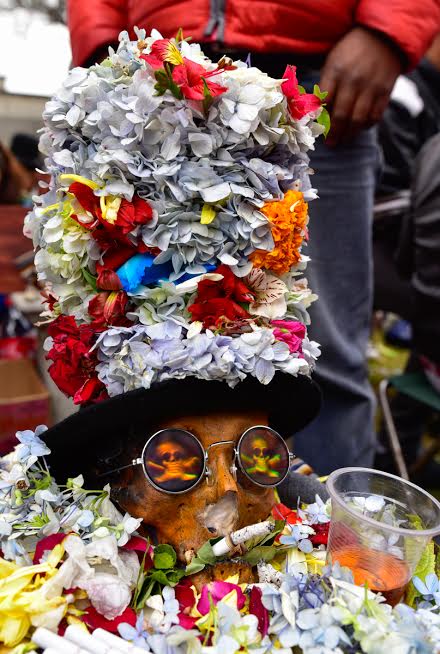 Surrounding Doña Ana’s enshrined skulls are small images and statues of Catholic saints. This is typical—Catholic symbolism such as the Rosary, Virgin Mary, and Christ blessing are almost as ubiquitous as coca leaves when it come to the ñatitas. Added to the fact that the Fiesta takes place in a chapel a week after All Saints and All Souls Days, at the end of the Octave of the Dead, there is ample evidence that some level of syncretism between indigenous Aymara and traditional Catholic beliefs has gone on. Indeed, those who bring arrive at the cemetery toting skulls universally consider themselves to be both good Catholics and Aymara, and do not see any conflict between the two. The process of syncretism is more superficial than it initially seems, however, and the veneration of the ñatitas has proven highly resistant to Western attitudes towards death. Despite being held in a cemetery stocked full of skulls, the Fiesta is in no way a celebration of death, and those gathered in attendance will take umbrage at any insinuation that it is morbid. All photographs by Paul Koudounaris

Paul Koudounaris is an author and photographer in Los Angeles. His PhD in Art History has taken him around the world to document charnel houses and ossuaries. His books of photography include The Empire of Death and Heavenly Bodies, which features the little known skeletons taken from the Roman Catacombs in the seventeenth century and decorated with jewels by teams of nuns. His other academic interests include Sicilian sex ghosts and demonically possessed cats. For the past several years Paul has travelled to Bolivia to photograph and research Fiesta de las  Natitas.

More From the Order