Here we speak of the legal woes of one Lindsay Lohan.

For those of you not familiar with her current legal battle (understandable, as it is difficult to keep track of her various transgressions) we must first determine the material facts. I hope you are able to follow all my impressive lawyerly terms, courtesy two semesters of Mortuary Law. So this is where we stood when Miss. Lohan went before a judge for a pretrial hearing this past Friday.  The judge determined that LiLo violated her probation- which she was on for all the super obvious starlet stuff like cocaine and drunk driving.  The judge sentenced Lindsay to 120 days in jail, 360 hours of community service at the Downtown Women’s Center, and 120 hours of community service at the LA County Morgue. 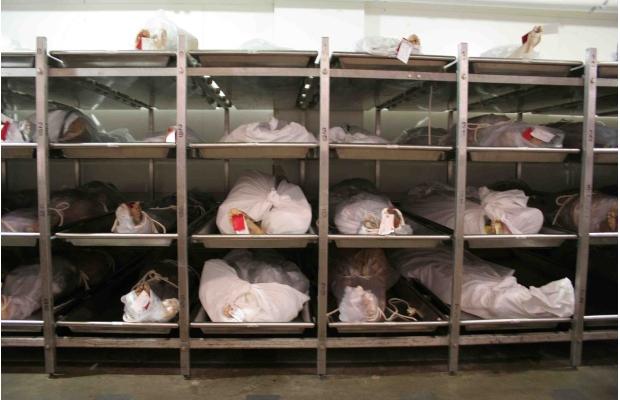 The morgue.  Like, the LA County Morgue?  No….NO- are you… seriously?

I remember the first time I went to the morgue at LA County.  I’d been to the San Francisco Medical Examiner’s Office, but comparatively that’s like sandbox bubble bath shit.  And mortuary school kids will back me up on this, the Orange County Coroner’s office is a high tech shiny magical paradise.  If you had to pick one grungy place overflowing with corpses to get a brutal mortality punch in the botoxed lips, LA County Morgue is it!

As it turns out, to fulfill her court ordered morgue community service, Lindsay will  be emptying trash cans and cleaning toilets.  “Her duties include cleaning and maintenance, but she would not clean the actual crypts where the bodies are stored,” says a source.  I don’t know who this “source” is, but a body cooler at a morgue is not called a crypt.  Even though the word “crypt” is obviously awesome.

Morgue toilet cleaning would seem to be the most vile job on the planet- a real punishment.  But at LA County it’s the morgue itself and its body coolers that are the real horror business.  I pictured Lindsay in the actual morgue in a Gucci hazmat suit, hosing down the blood & bile combo that drips out of the body bags.  LA County is the nation’s busiest, most woefully underfunded coroner’s office.  As a result, they ain’t even tryin’ to be neat.  They’re pumping autopsies out as quickly as possible- rip ’em apart and slam ’em in a body bag and stick ’em back in the cooler to baste like a holiday marinade. “[Lindsay] won’t be handling any dead bodies but she’ll certainly see them,” Coroner Assistant Chief Ed Winter said.  You really have to hope that she has any self awareness at all and will use this death exposure to turn her life around.  Although, to be fair she’s not much use as a productive member of society.  She’s only interesting as a drugged out former child star.  But then you gotta be like, ah man, she used to look like this and it’s the little child in us where the mortality fear comes from shit I’m a TERRIBLE PERSON. Let’s go back to the first time I went to the LA Morgue.  It was when I was a mortuary student, not a probation violating celeb criminal.  One of the mortuary school’s embalming instructors takes volunteers to retrieve unclaimed bodies from the morgue.  Life lesson: If you find yourself in the unclaimed dead coolers you might very well end up as an embalmin’ practice corpse for a bunch of incompetent students.  Sorry.

The morgue has two massive holding pens for the unclaimed, often unknown indigent dead.  The morgue attendant opened the refrigeration unit to reveal hundreds of identical white bodies, stacked 5 shelves high.  The bodies were what mortician & poet Thomas Lynch calls, “larger than life-size sperm” for the way hospitals and coroners offices tie the white body bags tight around the deceased’s feet.  The smell is decomposition on ice.  It is unmistakable.  Every refrigeration unit in every funeral home across America smells just like this.  But few units, if any, feature an entire city of dead bodies like a frozen sperm necropolis.  This is where they wait. As the embalming instructor was unloading our victims from their shelves, the morgue attendant busts out an album of glamour headshots of her five year old son.  This is hands down one of the weirdest moments of my life.  One of those moments that would have been surreal even if it wasn’t against the backdrop of hundreds of corpse shelves.  Apparently the morgue attendant’s son is an active participant in Hawaiian Tropic beauty pageants. A little boy version of Jonbenet Ramsey.  There is a full catalog of pictures: Here’s Junior as a sassy cowboy!  A pensive hippie!  A devilish Chaplin!  Mother is obviously exceedingly proud, “the other moms want to know how I do so well with him. You got to buy the Brooks Brother’s suit, you’ve got to put in the money and the effort if you want to win.” I’m not sure exactly what the moral is here.  It probably has something to do with the fact that there are thousands of people who LA County cremates every year and are dumped in a mass grave.  And yet when you type “LA Morgue” into Google images this week, half of the pictures are now of Lindsay Lohan.  She has done no more than any of those people to contribute to society.  Yet as a group, we arbitrarily select people to consider important while others rot away in cold silence.  Groupthink fail, non?