This is part two in a three part series by Maureen Shockey on being a young person suddenly confronted with the responsibilities of death.  To catch up, read part one here.

Writing a will is an annoyance for most people in any situation. But for two people scrambling to get it done, it sucks. And when one person is sick and in pain, and the other two time zones away and trying not to freak out, it really sucks.

Don’t get me wrong, it was worth every drop of blood, sweat, and tears poured into it. But I’m pretty sure that we ran into every single roadblock on the way to getting a legally binding document. For those of you who don’t know anything about writing a will … well, I didn’t either. It’s time consuming and requires a lot of thought — you have to mentally catalog all of your belongings, all of your friends and family, and what goes to whom. If you’re ill and in tremendous pain, it’s hard to imagine putting that together, or dictating it to someone for hours at a time. I would have never imagined how emotionally and physically draining it could be. I can’t remember ever crying so much, stepping back and saying, “ I’m writing my friend’s will. My friend.” It’s probably the only experience I’ve had in my life that was equal parts horrible and rewarding.

We wrote the will through a series of phone calls and over 3,000 text messages, over the course of which my friend would sometimes black out from their pain in the middle of a conversation, and I, in my zeal to help, didn’t consider the physical limitations of all the typing and talking, and wore him down and made him feel worse. It’s hard to strike a balance between being timely and being exhausting, and in hindsight, I do regret pushing so hard. When someone is in their time of greatest need, their need should take priority over your own need to help, however well meaning.

We finally finished the will — and with a proofreading from my father (an attorney who only helped in the capacity of refining my legalese and double-checking that the final product would hold water in court, for which I am extremely grateful). Getting the will witnessed was another nightmare, and it was in trying to get this done that I began to notice a really horrible pattern. In order to be 100 percent legal, a will must be witnessed, as must advance directives. We were arranging a health care proxy, and power of attorney. Almost everyone who initially volunteered backed out. Why? They were uncomfortable with my friend’s illness. It was more comfortable for them to treat my friend like he was already dead than to sign their name in the same room as someone who was very much still alive, albeit very sick.

I think it’s about time I told you all a bit about my friend. 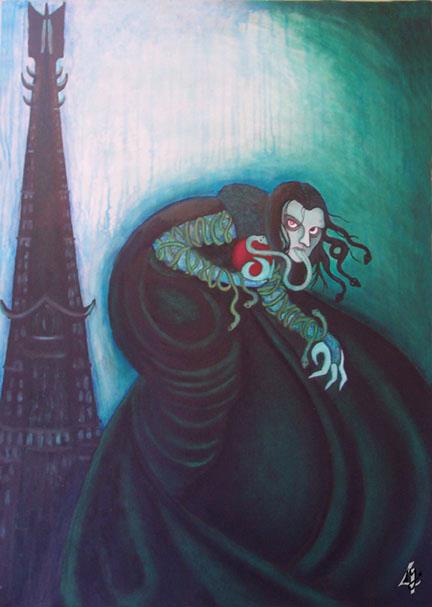 Grima is a multidisciplinary artist. By multidisciplinary, I mean painting, sewing dolls and fantastic period costumes, and even welding. He’s lived through about a million catastrophes and insane circumstances and never lost the will to teach or create. Grima suffers from Ehlers-Danlos syndrome, an intensely painful genetic disorder of the connective tissue. He is roughly ten years older than I am and when we met, I found a true mentor — support from one disabled artist to another (I suffer from Tourette syndrome, which, in my case, results in what is effectively a chronic pain condition).

Grima is selfless, caring, and pours every last drop of effort into everything he does –artistically and in his friendships. Even when he is in terrible pain, if I have a bad day, he’s always been right there in my corner. If I sound saccharine, believe me, that stuff rots your teeth. I’m being honest. With all of this taken into consideration, I found it absolutely abhorrent that people close to Grima would shut him out of their lives for their own peace of mind.

When the will was finally signed, it was not done by his friends. It was done while Grima was in the hospital, and I had the document faxed and signed by two nurses, who probably never want to hear from me again after about a billion phone calls pleading with them to do something that they are equipped to do, capable of, and trained to do. Important lesson, kids — people die in hospitals all the time. If a hospital tells you that they don’t do wills, they either don’t want to bother with you, or they’re lying. Even rehab facilities are able to provide that service, just in case. So with all due respect to the grueling schedules and stressful environment of the health care industry, sometimes you’ve got to be irritatingly persistent just to make people do their jobs.

After the will was signed, we both wanted to throw a party. It was a HUGE relief. But the problem of isolation still bore down heavily on Grima, and after all we had been through, I began to realize a few simple but hugely important ideas on how to be the best friend that you can possibly be to someone who is ill.

-Keep in touch. People feel better when they know they are cared for and kept in mind, and that someone still gives a shit about them, regardless of their health status.

-Respect boundaries. This extends to “keeping in touch.” If your friend needs to sleep, or they’re feeling too crappy to chat, let them have their time, and respect their space. If you ignore this, you are basically saying to the person in question, “you’re not fit to make decisions for yourself, let me make them for you.” This is dehumanizing and demoralizing, so only go over their head in a total emergency.

-Only do what you are able. If you are not physically, financially or emotionally able to cope with certain aspects of a situation, make it clear to the person whom you are helping. Otherwise, you may grow resentful, depressed or exhausted. Or all of the above. Thankfully, I only got the exhausted part, but everyone’s different.

-Take it a day at a time. Everybody has bad days.

-Take care of yourself. Someone you love is dying, you’ve got a lot on your mind, too!

-Ask “ how long do you have?” or anything specific about a person’s condition unless they are willing to share. It’s personal business, and the fact that you are helping does NOT entitle you to it.

-Ignore them. This is the WORST offense. People are either alive or dead, and sick is a hell of a lot different than dead. Do as you would be done by, and I don’t know anyone who would want to be left alone when they’re sick and afraid and sad.

-“Dump” onto them. This person only needs positivity right now. If you are sad and frustrated, confide in another source.

Next time: Isolation by proxy, and an important visit.